A month to celebrate Native Americans, their culture, and their contributions to the United States. In 2021, President Biden became the first President to declare Indigenous People's Day (second Monday of October) as a national holiday. Since 2009, the Friday after Thanksgiving has been established as "Native American Heritage Day", but ."

Native Americans (also known as Indians or American Indians) describe the indigenous peoples of the mainland United States, along with Alaska natives (Aleut, Yup'k, or Inuits, the last are also known as Eskimos).  According to a 1995 Census survey, more Native Americans preferred the term American Indian to Native American. Nevertheless, all three terms are used interchangeably. Recent surveys state name of tribe (such as Cherokee) is a better term than an overall term.

On the 2020 U.S. Census form, respondents could self-identify if they belong to one or more races. 7.1 million reported Native American or Alaska Native alone or in combination with one or more races. This forms 2.1% of the total U.S. population. 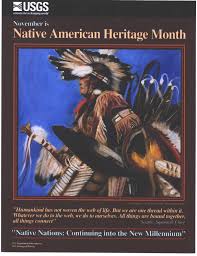