Since 1982, Banned Books Week has been an annual awareness campaign to celebrate the freedom to read, draw attention to banned and challenged books, and highlight individuals persecuted for what they publish or read.  The American week, through organizations such as American Library Association, highlight the first two. The International week, highlighted  by Amnesty International, focuses on the third.

Challenge = attempt to remove or restrict materials based on the objections of a person or group
Ban = removal of the materials
Banned and challenged books are ones considered  "inappropriate" or "offensive".  The three top reasons, according to the American Library Association Office for Intellectual Freedom,  for challenging a book are:
1. Material is considered to be "sexuallty explicit"
2. Material contained "offensive language"
3. Material is "unsuited to any age group"

It should be noted the all sides of the political spectrum engage in challenging and banning books. 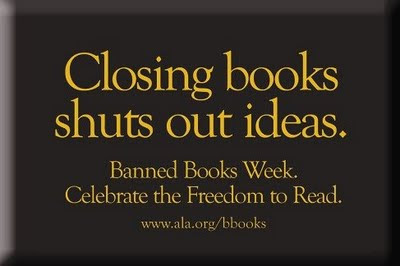 On that note, feel free to read the lists and read the titles that you desire:

Seven Banned Books From Around the World (Mango Languages)

Some Quotes To Consider:

If there is a bedrock principle underlying the  First Amendment, it is that the government may not prohibit the expression of an idea simply because society finds the idea itself offensive or disagreeable.

Everyone has the right to freedom of opinion and expression; this right includes freedom to hold opinions without interference and to seek, receive and impart information and ideas through any media and regardless of frontiers.

11 Quotes from Authors on Censorhship and Banned Books - Buzzfeed.com

According to the Alabama Library Association Office of Intellectual freedom, these are the ten most frequently challenged books in 2017.

If ASU does not have access as indicated, links go to that title's WorldCat Local record. You can click on  "Worldwide libraries own this item" so you can see what libraries nearby have copies of the title.